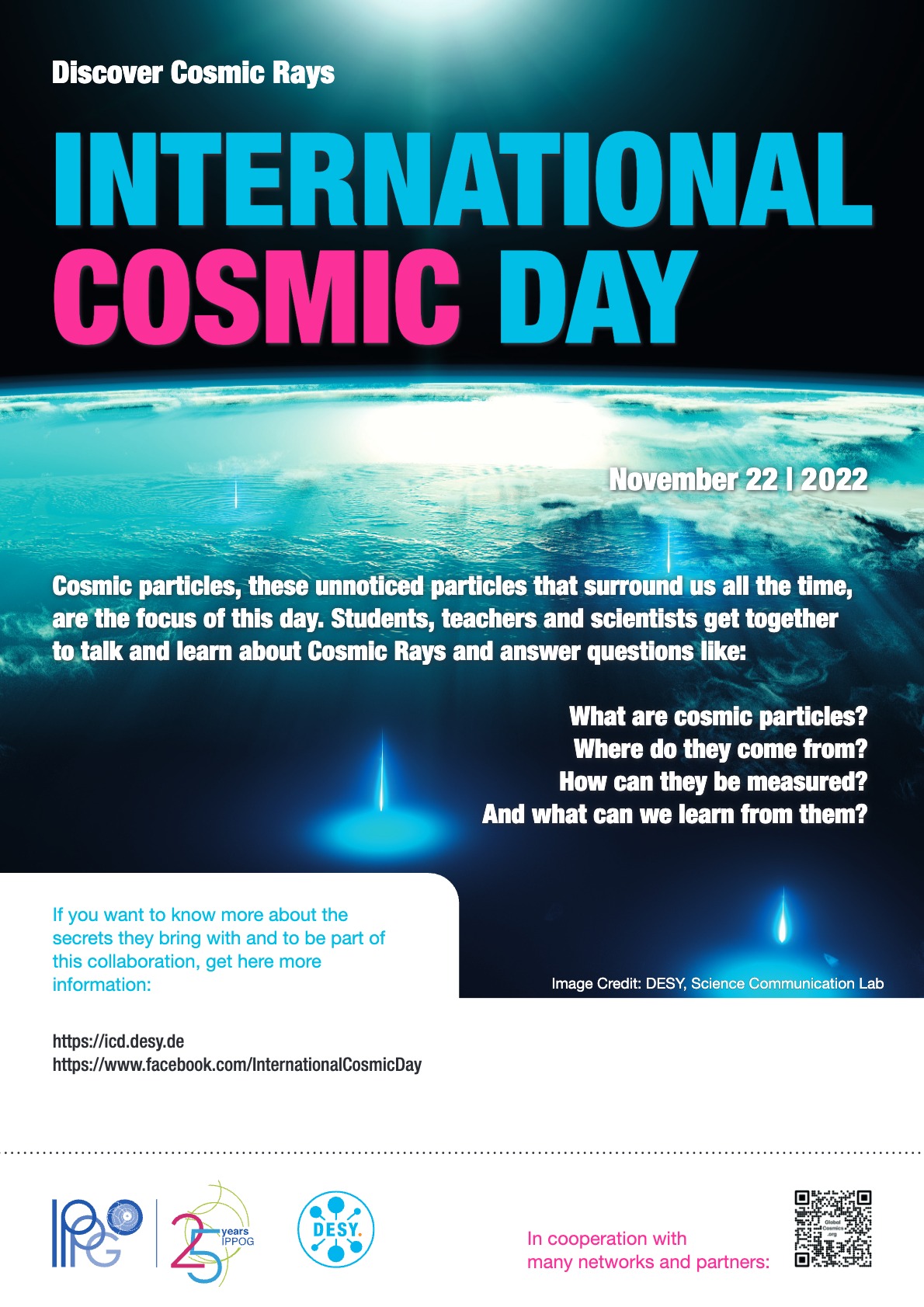 The International Cosmic Day is a one day event and take place once a year, usually in November. During this day, students, teachers and scientists come together to talk and learn about cosmic rays. If you want to be part of this day you can get more information:

On November 22, 2022, it's that time again: On International Cosmic Day ICD, young people become researchers in astroparticle physics. In 2021, more than 60 institutions such as schools, universities and research institutes in over 13 countries participated in the day, allowing young people around the world to perform experiments on cosmic particles that constantly pass through us unnoticed. Participants experience first-hand how to explore the invisible. This gives young people the opportunity to gain direct insight into the world of science. The young people are supervised by scientists and teachers.

Astroparticle physics is a field of research that combines particle physics with astronomy. Astroparticle physicists use knowledge of the smallest known particles and their interactions to understand the largest objects and structures in our universe. This combination of the tiny and the large, along with many technological developments, has given us many new discoveries in the last decade. It has become clear that light - or more generally, electromagnetic waves - is not the only messenger of distant objects in the universe. Researchers around the globe are now able to observe ultrahigh-energy cosmic rays, gamma rays, neutrinos, and even gravitational waves with their telescopes.

Since 2012, the 100th anniversary of the discovery of cosmic rays, DESY has been in charge of coordinating the International Cosmic Day, this special event for young people interested in science, who get a day-long insight into how scientific work in astroparticle physics works. The students of the participating groups do not know each other, they live in other cities and countries, even on other continents. And yet, at the end of the day, they have a lively exchange about their new findings. The joint work shows the young people how international cooperation works in general and how science functions as a unifying element across national borders, language barriers and cultural differences. Many have never heard of cosmic particles. Not only can the young people learn from scientists about the latest research in this field, but during the ICD the young people work like scientists themselves. "They measure cosmic particles and discuss their results with other participants around the globe - a truly extraordinary event. The young people experience how new knowledge can be created together. On this day, they work like in an international collaboration," explains Carolin Schwerdt, coordinator of the astroparticle projects for young people at DESY in Zeuthen and the Netzwerk Teilchenwelt in Germany.

In the early years, everyone received the same tasked and the results were discussed afterwards, at that time still in text chats. Today, the possibilities to explore cosmic particles at the ICD have become more diverse. Those who do not have access to experiments can access data from long-term experiments. And up to 10 video meetings are now held around the clock. In addition to video messages, as in the first year by physicist and Nobel laureate James Cronin, and integration of data from the major experiments such as ATLAS or IceCube, the offerings for this day have been steadily developed. Particular attention is paid to ensuring that the young people are actively involved and enjoy discovering and presenting: Each year, the participants produced a joint brochure with their findings from the day. In recent years, offerings such as a selfie contest or a quiz have been added. In the anniversary year, we can look forward to the contributions in the first drawing competition. This calls for creativity.

With the development of astroparticle physics, completely new windows to the universe are opening in astronomy. All cosmic messengers – be it charged cosmic rays, gamma rays or neutrinos – allow us to see the universe with different eyes. In 2017, thanks to the combined efforts of different experiments, a breakthrough was made: the discovery of different messenger particles from one and the same object - an active galaxy more than four billion light-years away. This was the beginning of multimessenger astronomy. We know that there are many different objects in the universe that generate cosmic rays. This promises more exciting discussions for young people with researchers on International Cosmic Day in the years to come.

Since the beginning, the ICD has been organized by DESY in cooperation with Netzwerk Teilchenwelt in Germany as well as on an international level with the International Particle Physics Outreach Group IPPOG, the research center Fermilab in the USA and its teacher network QuarkNet. Over the 10 years of its existence, many supporters joint and very close partnerships with networks and research institutes worldwide were build, so the ICD was able to establish itself well over the years. Many of those involved in research and school sent congratulations on the anniversary (see www.icd.desy.de ).

Two explanatory videos on cosmic particles for ICD could be found here: https://icd.desy.de/e35439/