ALICE is a heavy-ion experiment, designed to study the collisions of nuclei at the ultra-relativistic energies provided by the LHC. The aim is to study the physics of strongly interacting matter at the highest energy densities reached so far in the laboratory. In such conditions, an extreme phase of matter - called the quark-gluon plasma - is formed. Our universe is thought to have been in such a primordial state for the first few millionths of a second after the Big Bang, before quarks and gluons were bound together to form protons and neutrons. Recreating this primordial state of matter in the laboratory and understanding how it evolves will allow us to shed light on questions about how matter is organized and the mechanisms that confine quarks and gluons. 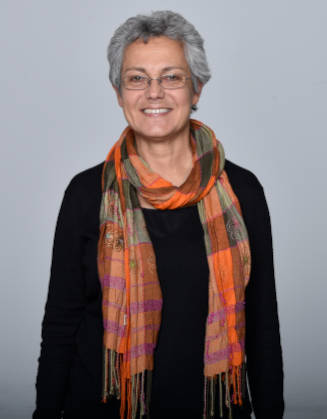 Despina studied physics at the University of Thessaloniki, in Greece.  She obtained her PhD from the same University on a baryonium experiment at LEAR, CERN. After a two-year CERN fellowship with OPAL she remained at CERN working on detector development projects (LAA) and the L3 experiment.  Since 2000 she has been working for the ALICE experiment as a member of the Time Of Flight project, a large Multigap Resistive Plate Chamber (MRPC) array developed and constructed by her group. She has a researcher’s position at INFN, the Italian Institute for Nuclear Physics, in Bologna. She is also a member of the Extreme Energy Events (EEE) project, a cosmic ray experiment combining scientific research and outreach and involving Italian high schools. Despina is active in a variety of outreach activities such as CERN open days, visits of schools and the general public to CERN and virtual visits; she also gives talks to schools and public events. Since 2009 she has been the outreach coordinator of ALICE and the ALICE representative to IPPOG.  She has a special interest in the particle physics masterclasses, and is involved with the development of exercises with ALICE data; she organises masterclasses at CERN, in Greece and enjoys introducing new institutes to this flagship activity of IPPOG.